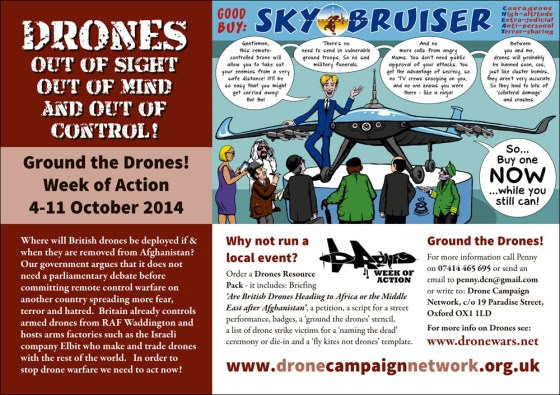 The Drone Campaign Network is once again organising a week of action - in conjunction with Keep Space for Peace Week - to challenge the growing use of drones. The week is an opportunity for the local peace and human rights groups to campaign together on this issue and to reach out to the public.

Local events are being organised including protests at drone bases, factories and test centres; as well as street stalls and public meetings.
For the first time this year a Global Day of Action has been called for Saturday 4 October to coincide with the Week. As part of this campaigners in the UK will gather at ‘RAF’ Croughton - a US base - near Oxfordshire that is plugged into the drone wars via a direct data link to the US drone base in Djibouti.

The Drones Campaign Network has also launched a petition to stop British drones being deployed to the Middle East or Africa as we approach the end of combat operations in Afghanistan. You can sign the online petition here and/or download a copy here in order to collect signatures locally. If you can organise something in your area we are happy to provide resources including campaign pack, briefings, street theatre script and leaflets. We can also provide speakers for public meetings. For more information see Drone Campaign Network or contact [email protected]

Do come along on October 4 to RAF Croughton to help Ground the Drones or help organise something locally in your area.

The U.S. will be spending £200m to turn U.S. Croughton into one of it's largest international intelligence hubs. This major U.S. communication and intelligence base supports many US military sites in Europe and is involved in world wide war  operations. These include space communications, data links, military drone information, bomber guidance, missile defence, diplomatic communications, and command and control war fighting functions. A connected base is at Barford St John,  Banbury, Oxfordshire.