Major cabinet roles in the new LibDem-Green partnership have been assigned to three Greens at South Oxfordshire District Council, just two weeks after the election of the first ever Green councillors in the district. 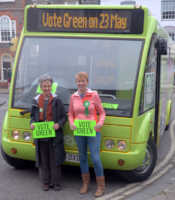 A special new leadership role was created for Dr Sue Roberts: oversight across all departments on Climate and Ecological Crisis Response, providing direct support to the leader, Sue Cooper. The leader has set as top priority the enactment of the Council’s strongly-worded Climate Emergency motion, passed in April by the previous administration.

Sue Roberts said, “In addition to the climate crisis, the new report from the Intergovernmental Panel on Biodiversity and Ecological Services gives a stark warning of the collapse of the natural world, with a million species facing extinction. It’s vital that all levels of government and society respond to these interlinked threats. The focus of my new role, working closely alongside the leader, is to ensure that all departments at of the council make this response a key part of their work and decisions.”

The Greens’ Andrea Powell has been appointed cabinet member with delegated authority for Corporate Services and Communications, while Robin Bennett will take on Economic Development and Regeneration.

Peter Dragonetti, who stood as an independent but has now joined the Green group, will be vice-chair of planning.