North Oxfordshire Green Party and individual Greens have donated generously to the funding of a Memorial to commemorate the people from Oxford who volunteered to defend democracy and fight fascism in Spain during the Spanish Civil War of 1936-39.  We hope the unveiling will be on Saturday June 10th just outside South Park at the junction with Headington Hill and Morrell Avenue.

We still need more funds though, so we are holding a fund raising dinner with guest speaker on Tuesday 28th March. Professor Valentine Cunningham of Corpus Christi, Oxford, is the guest speaker.  He is as entertaining as he is knowledgeable about the literature on the Spanish Civil War.

Also available are Lottery tickets (£1 each) with wonderful prizes! Get your lottery ticks from John Haywood, [email protected]. Winners will be announced  on June 10th.  The prizes include: a 4 day guided tour of the Ebro battlefields - all accommodation, meals, transport provided (though not air fares!); 12 bottles of Spanish wine; a £150 voucher towards a holiday at Unison's Croyde Bay, Devon; a 3 course meal; a rare copy of Searchlight on Spain by the Duchess of Athol; 2 tickets for any play at the Oxford playhouse; 2 tickets for any film at The Phoenix Cinema, and copies of David Ebsworth's ‘The Assassins Mark’ and ‘When the Curtain Falls’.

The International Brigade Memorial Trust keeps alive the memory and spirit of the 2,500 men and women from Britain and Ireland who volunteered to defend democracy and fight fascism in Spain during the Spanish Civil War of 1936-39.  Across the world, 50,000 men and women from all walks of life responded to the call from the Popular Front government of Spain and joined the International Brigade and its partner organisations to defend democracy against the fascist insurgency of General Franco. Some 2500 were from the British Isles and of these, 526 paid the ultimate price and were killed in action against a far better equipped and resourced enemy. 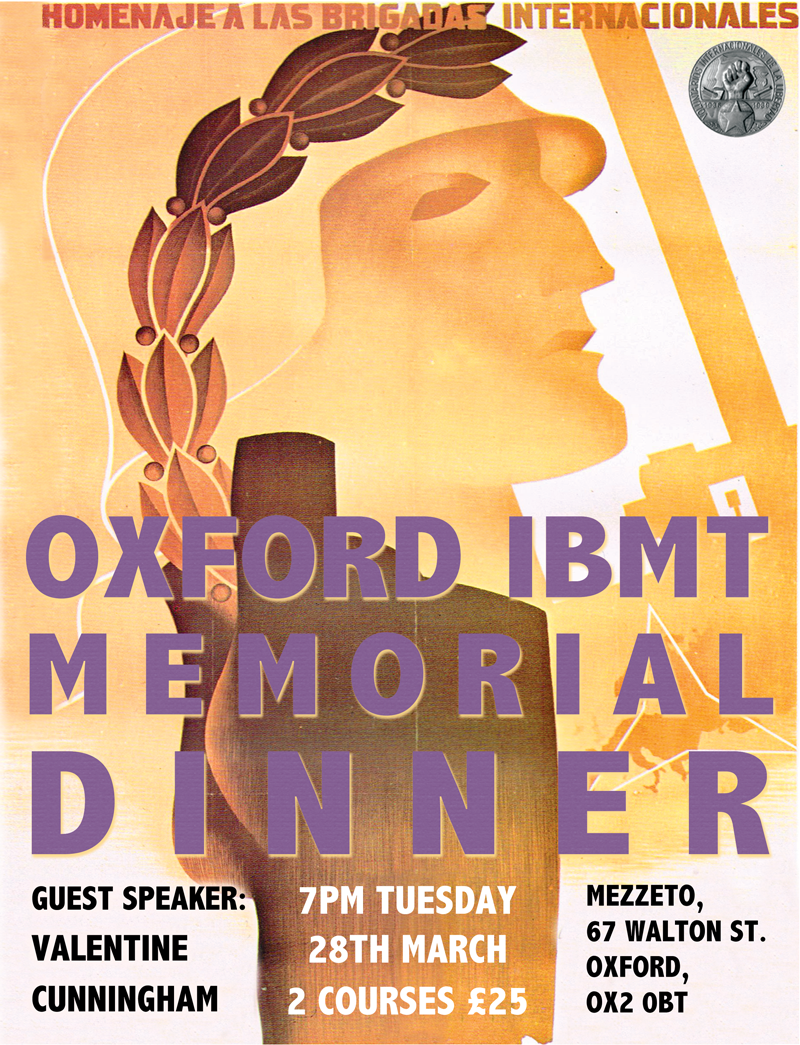