Greens for Europe - The Issues 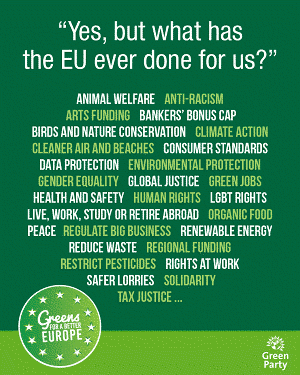 Being part of the EU makes sense when it comes to protecting our environment. Pollution and environmental degradation don't respect national borders - so we clearly need cross-border solutions to the challenges we face. If we join forces with other countries, strengthening the EU-wide rules on carbon emissions that are already in place, then we have a chance of keeping future generations safe.

Our beaches are cleaner, our air less polluted and our wildlife is far safer because of EU rules. Some of our dirtiest power stations have been closed thanks to EU directives.

The Government has dropped some heavy hints about what would happen to our environmental rules if we quit the EU. Ministers have tried their best to water down air pollution rules, the Chancellor has said that EU nature laws place 'ridiculous costs' on British firms and, most worryingly of all, the Government has been vigorously stripping away support for clean energy and renewable technology in the UK.

Being a member of the EU means being part of a cross-continental market. It is therefore crucial that worker's rights also span borders.

From protection for part-time and temporary workers to protection from discrimination; from rights for working parents to the right to paid holidays and a regular lunch break; from health and safety to promoting employee voice; the EU has been fundamental in making the British workplace a fairer and more equal place.

You only have to look at the Tories approach to workers’ rights to see the clear risk of leaving the EU. European rules are a safeguard against the Tories' love of deregulation and their attacks on trade unionists.

We are richer because of freedom of movement. Our lives are enriched when we share them with people from other countries, and our horizons are broadened because we can travel, work and study easily across the EU.

Students benefit from being able to study abroad. Brits can easily retire in Spain. Our economy is stronger because of people coming here to work and contribute.

Leaving the EU wouldn’t just risk our multicultural society here in Britain. It would could also stop us from being able to easily study at great European universities,work abroad or retire to the Spanish sunshine.

Being a member of the EU gives us a better chance of getting a decent job.

A range of studies have taken place – by independent experts as well as the Government - which show that 3-4 million jobs are linked directly and indirectly to our trade with the EU.

Given that trading with the EU would be harder if we left, and would take many years to negotiate, these jobs would be vulnerable.

After the financial crisis of 2008 it has become increasingly clear that we need international rules to curb the excess of finance firms in the City of London.

The EU has brought in a cap on bankers’ bonuses and stricter rules on credit ratings agencies. The EU has also introduced a robin hood tax - which the UK refused to sign up to.

If we leave the EU the Tories would unleash another wave of deregulation on the City of London - possibly risking another financial crash in doing so.

Being part of the EU gives British businesses, both small and big, access to a 500-million strong market.

We get out more than we put in. Our annual contribution is equivalent to £340 for each household and yet the CBI says that all the trade, investment, jobs and lower prices that come from our economic partnership with Europe is worth £3,000 per year to every household.

Leaving the EU would risk economic stability in Britain. We’d be forced to negotiate trade deals with many countries - on terms dictated by the Tories.

Being part of the EU allows British students to broaden their horizons by living, working and studying abroad. Last year, over 15,000 students studied in another EU country as part of the Erasmus programme.

The EU provides billions in funding for research at British universities, opening up opportunities for further study for students here as well as funding that allows us to attract talented people from across Europe to contribute to research and innovation here.

Our membership of the EU helps British universities to thrive - leaving would do huge damage to the opportunities and prospects of British students.

The EU has been crucial to bringing about a lasting peace in Europe after the bloodshed of the Second World War. Britain has a particularly important role in this peace mission. We have made the mistake in the past of thinking that the Channel will insulate us from crises in mainland Europe. We are necessary to the effective management and conflicts of our continent; we cannot duck our responsibilities.

The EU has improved conditions for animals where national governments have failed to act, and its influence is felt beyond European borders. The EU brought in a blanket ban on animal testing for cosmetics; banned the import of products newly tested on animals and suspended the use of toxic bee-killing pesticides.

The EU has also brought in bans on cruel factory farming practices: The EU prohibited the use of sow stalls and barren battery cages for hens.

We all know the EU isn't perfect, but be in no doubt, if animals had votes they’d vote to stay in. The UK Government has already tried to weaken laws on laboratory animals - this doesn't instil confidence that if we were to leave the EU, the current level of protection for animals would remain.

Pledge to vote Remain on 23 June