Can the Ox-Cam Arc fit in the Doughnut? Economics and the Arc

The Ox-Cam Arc is a large scale plan which, if adopted, would reshape our county. You can read more about it here. In this blog series, we take a look at the issues and challenges around the Arc, and how the Green Party is responding. In this blog, we’re looking at the economy. And doughnuts.

As Greens, we believe that the economy is about more than just increasing GDP, or making money for shareholders. Our economy should work to improve all our lives, and it should do that without damaging the planet.

We’re big fans of Doughnut Economics, an economic model developed by Oxford economist Kate Raworth. This concept aims to balance essential human needs and planetary boundaries. In response to the unprecedented challenges ahead, Doughnut Economics will be a crucial tool for fostering sustainability post-pandemic, as officials grapple with the fallout from coronavirus.

Basically, the doughnut shows us how far away from the boundaries set by the planet we are, and how far away from meeting the needs of our society we are. We want to end up inside the doughnut – enjoying a delicious combination of social goods, while avoiding over-exploiting and damaging our natural environment. 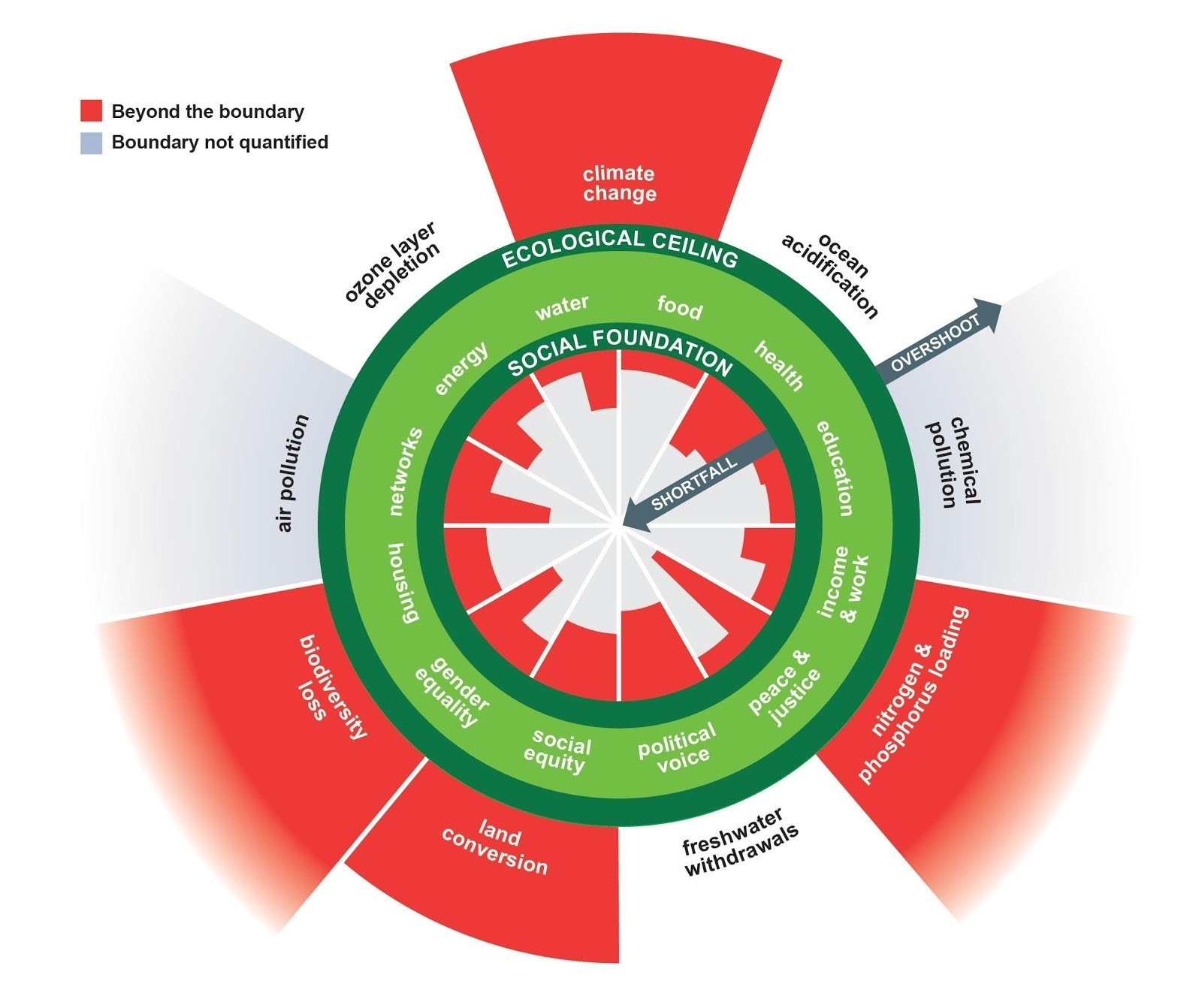 Food, housing, healthcare and other needs must be met while ensuring that we do not collectively overshoot pressure on Earth’s life-supporting systems which we depend on. This requires us to start being “agnostic about growth”, and to face the unprecedented challenge of creating economies that make us thrive, whether or not they grow. Note that this doesn’t mean we want to lower living standards or take away things we enjoy – it just means that our economy needs to balance this against the needs of the planet, and distribute the resources we have fairly.

So, with that in mind – can the OxCam Arc fit in the doughnut?

However, as is, the plan still looks like it’s built around a 20th-century, GDP-based version of growth. So how do we change that? Firstly, rather than setting up an Arc Growth Body, we should set up an Arc Climate Emergency Body instead – which focuses on getting the results for people and planet we need, rather than growth for its own sake. This has happened elsewhere in the county; bearing in mind the fact that there is a climate emergency, the Oxfordshire Growth Board is now the ‘Future Oxfordshire Partnership’ – a change that reflects a much needed shift in focus, and will hopefully be a shift not only in name.

Some of the areas that reflect this 20th century thinking are homes and roads. As much as supporting growth “in a way that is sustainable” – as the current proposal puts it, is a very desirable objective in principle, some of these factors risk undermining it.

When it comes to transport, the harsh reality is that every meter of road built destroys carbon sinks we badly need, and emits further CO2 in the process of being built – and that would be before the increased usage of any new roads. In Oxfordshire, for example, road transport has already been the single largest CO2 emission source, by sector, since at least 2014, and we simply cannot afford to let this continue anymore. We want to see much better provision of public transport and active travel, to get people out of cars as much as possible.

Another major point of contention is housebuilding. Again, the current proposal is based on houses as an asset, not a place to live. Contrary to the prevailing dogma, there is little if any evidence that building more houses has any significant impact on house prices, particularly given the repeated interventions by Central Government to support the current unaffordable prices, that only serve to profit developers.

The number of empty properties have increased for the last four years in a row, and it is hard to conceive how building yet more homes would help assuage the empty homes problem. Much less carbon budget would be spent if we devised a policy to re-deploy currently empty housing stock.

We want the right homes in the right places – and that means big changes are necessary to tackle the issues at the heart of the housing crisis. If you look at our manifesto, you can see how we propose tackling soaring prices by bringing the rental sector under tighter control, and purchase property that has been long-term vacant, returning it to use as social housing, seeking compulsory purchase orders if necessary.

If we can get this right, we can genuinely create an area that leads the way in terms of a green economy, that’s fit for the 21st century.

There are plenty of example to draw on too - cities all across the Arc could consider initiatives such as joining the City of Amsterdam as a pioneer in the “Donut Coalition”, to promote a regenerative local economy, and/or joining the C 40 Network as an “Innovator City”, signing up to commitments from the world’s leading cities, for instance by endorsing “Deadline 2020”, a commitment to urgently pursue high ambition climate action, demonstrating how to deliver on the Paris Agreement.

If you want to submit your own views to the consultation, you have until October 12