Cameron offered lessons in financial literacy by the Greens 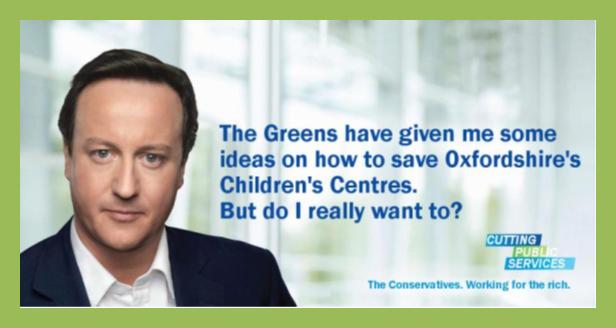 Oxfordshire’s Green Party County Councillors have written to David Cameron following his ill-informed comments on the County Council’s dire budget situation offering him lessons in financial literacy and setting out five simple measures that he could support which would alleviate Oxfordshire's financial crisis.

The County is facing drastic cuts to services as a result of the Government’s austerity measures and is planning to close libraries, museums and children’s centres, make further deep cuts in social services, remove bus subsidies and more besides to make up the annual £50m shortfall in funding. In his leaked exchanges with the Conservative County Council Leader, Cllr Ian Hudspeth, the Prime Minister was shown to have little grasp of local government finances and, in particular, the cuts and spending pressure being faced in  Oxfordshire.

To help the PM to understand some of the basics, the Greens have set out five positive actions that the Government could undertake which would help safeguard frontline services in Oxfordshire. And most of them will not even cost him a penny.

Says County Green Group Leader, Cllr David Williams, who has more than 30 years of Local Government experience. “It is shocking that David Cameron seems to have such a weak grasp of local government finance. If he is willing to pay for my time, I will happily take him through the basics. I will donate my fee to one of the many local services to suffer from the County Council cuts.”