Earlier this week, Oxford Greens gathered in the beautiful setting of Wesley Memorial Church to hear from an inspirational figure in US politics - Bernie Sanders.

Bernie, a true “good guy” in US politics, is brother to Larry Sanders, the Green Party candidate for Oxford West and Abingdon.  Bernie spoke to us via webcam from his senate office between votes – it was clear to 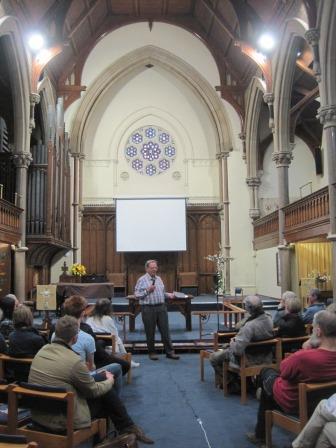 everyone this was a hard-working politician! From the brotherly banter, it was evident that these two brothers share more than a common political vision.

Bernie describes himself as a democratic socialist. He first entered politics as an independent candidate for mayor of Burlington, the capital of Vermont. Despite being proudly socialist, he was so popular, that over the 8 years he served, the voting rates in Burlington increased as people were motivated to vote to keep him in office. After his success as mayor, Bernie ran for the senate as an independent candidate. Everyone was delighted to learn that in 2006 he won the race in a landslide victory, gaining twice as many votes as his challenger - a billionaire businessman. He was reelected again in 2010. It was pointed out that if - or when - he does declare himself a candidate for President, it will bring a much needed balance into the debate, bringing a clear voice from the left.

While battling the almost inevitable technical hitches that will happen with a live webchat between Washington and Oxford, Bernie discussed the main issues he is fighting on in the senate – it turns out they are Greens Party priorities too – fighting against austerity, free trade deals, corporate interference in politics and climate change.  He considers the biggest problem facing America is the growth of inequality, and the resulting collapse of the middle classes. He described in depressing detail how corporate interests are eroding the democratic process 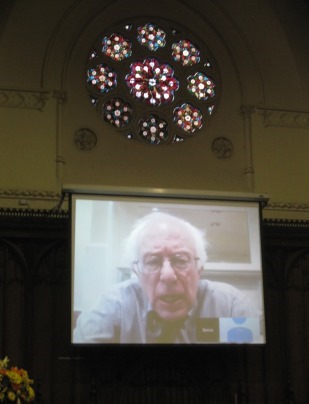 in the US; the situation is even worse there than in the UK, as corporations are pouring money into political campaigns following a court ruling by the High Court that corporations can be recognised as people for the purposes of political donations.

Bernie was asked by a member of the audience if he had any recommendations for aspiring young politicians. The audience was impressed by his answer...your aim should not be to have a career in politics; instead you need to decide what you want to change in this world, and once you’ve found that passion, fight for it. The path to achieve that change may lead you into politics, but elected office should never be an end in itself.

The audience was left impressed, inspired and all the more motivated to support Larry Sanders in his bid to become the next MP for Oxford West and Abingdon!

[A video of the evening should be available soon]