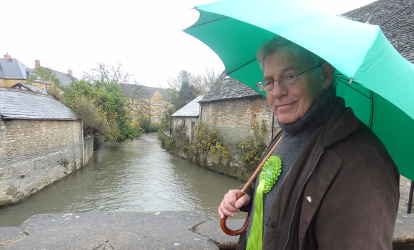 Stuart Macdonald is the Green Party candidate for the Witney constituency in the general election on 7 May 2015. He will be challenging that well-known public relations man, David Cameron.

Stuart won 4.2% of the vote in the 2010 general election, the sixth highest Green vote in the country—not bad in the prime minister’s own constituency. With your help we can do even better in 2015, thanks to the Green surge. Pledge your support below.

Stuart Macdonald is a local candidate, having lived in Witney for nearly 20 years. He is married with four children, two of whom live in Witney. He works as a professor in a management school, trying to persuade students and colleagues that society requires more than cut-throat competition.

Why is he standing?

He is standing in the election because he believes the country desperately needs radical change. Massive inequality deprives most people of choice. There is nowhere better to say this than in David Cameron’s own constituency, where the inequality is huge—and ignored.

What will Stuart do?

I believe that all our resources (not just our natural resources) are precious and that we must use them responsibly and for the common good. I will remind David Cameron that in his own constituency, one of the richest in the country, the “greenest government ever” has meant collapsing infrastructure, flooding, and food banks.

To read more, see Stuart's articles on his blog, including:

Support our challenge to Cameron

There will be lots of candidates in Witney, counting on the media attention in the Prime Minister's constituency. But to mount a serious challenge, we need to quickly raise at least £1300 to print Freepost leaflets that will go to every household, and pay the parliamentary election deposit.

We are running a pledge please give whatever you can spare.