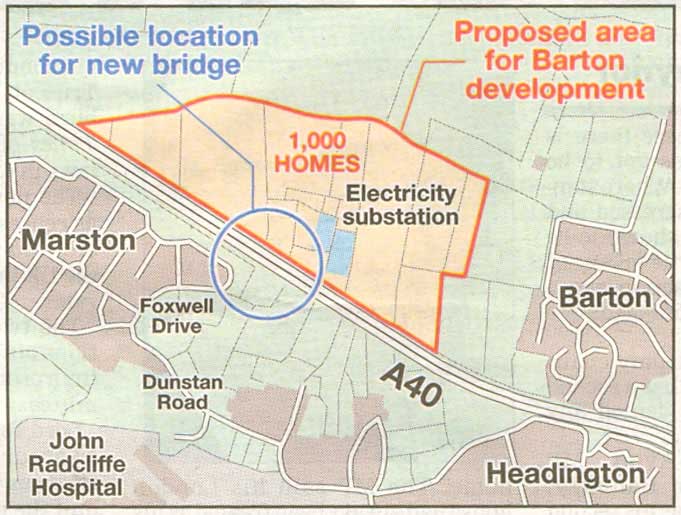 However the objections were not taken on board by the Council and the Inspector, apart from some rewording of the policy of not building directly on to the A40.

We realise the current outline application cannot be readily opposed on these grounds where it is in accordance with the approved AAP.

We have however, comments, objections and reservations as follows:

Number of Houses and Hotel

The application is for 885 residential units C3 which could include 50 C2 extra Care Homes.

This, however, is a maximum figure and the application also allows for a 7,350m2 hotel C1 which if implemented would reduce the amount of housing. Given the need for more housing, especially affordable housing, we would the question of the need for a hotel which will presumably encourage car borne visitors from the A40, not all necessarily visiting Oxford. It was not a use considered in the AAP in its consultation and Examination Stages and therefore has not been subjected to proper scrutiny as a proposal.

We are also concerned about the density and height of the development. About half the site is allocated as up to 3 1/2 storeys high rising to 5 storeys at the main access to the A40. The development is located in the valley slope of the Bayswater brook and is visible from the South Oxfordshire and Headington (including Conservation Area) sides of the valley and is at present very rural and wooded in character. The Environmental Impact Assessment says it will have moderate to slight or negligible effects on the landscape but we do not think this can be properly assessed without modelled views of buildings of this height and their effects on views into the site presented as part of the application. We consider a less dense development of lower heights. We are also not convinced that at the heights that are postulated the development would result in a 76% house to 24% apartment split. It in fact suggests the provision of far more apartments. In our view the indicative heights need to be reduced if there is to be a predominance of family housing.

There is a current submission with the County Council for Town Green status for the green strip on Northway at Foxwell Drive.

If granted this would prevent emergency and bus access to Northway. Though procedurally this does not interfere with granting planning permission for this at this stage, it is really necessary to know what happens if the Town Green goes ahead and prevents this sort of access.

There have been no consultations on the alternatives to this which could mean more use of the access through Barton. If planning permission is granted it should be on the basis that the permission is only valid if the Town Green application is not forthcoming. If Town Green status is given to the Foxwell Drive Green, a fresh outline must be required with details and a proper traffic assessment and consultation on alternatives for emergency access and bus access.

Allotments and Community Gardens and Pollution

It is proposed to extend the existing allotments north to the A40 boundary. We are concerned about food crops being grown close to the A40 particularly in this position quite close to the Green Road roundabout that has pollution above safety levels already. Reports are dismissive of pollution form the A40 saying lowering speeds to 50 mile per hour will reduce pollution. It is not clear that there has been any detailed study or research, but rather this is a supposition made from generalities that reduction in speed can cause less pollution. We are also concerned about pollution in and around buildings and the public access to them along the extent of the A40.

As it looks as if this storage will be at the bottom of the site adjacent to the Bayswater brook, it could be located in the open space and ecologically significant part of the site. As this storage will be vital to the development of the site and the protection of those downstream, it is not something that can be presumed generally acceptable until exact details of its form are supplied and its effects on the amenity on this leisure nature area are explored in this outline application.

The AAP had postulated a District Heating scheme. We note this has been considered not flexible enough for the developer to implement. It is stated some houses and other buildings may have solar PV and solar thermal up to the planning requirements of 20% energy from sustainable sources. We would favour this as the most minimal provision and suggest that much higher provision of these solar devices are provided.