On Friday, the Green Party Stop Brexit electric bus came to Oxfordshire, bringing Elise Benjamin and Larry Sanders, two of our European election candidates to you.

We are campaigning to elect more Green MEPs to fight climate change across Europe.

The bus went to Kidlington, Oxford, Sandford, Abingdon and Wallingford, ending up at the Wood Festival, meeting our newly elected Green councillors on the way.

We started in Kidlington, stopping next to the market and setting up a stall. 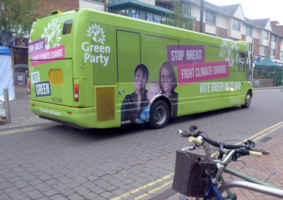 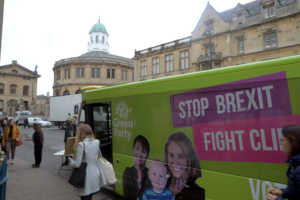 There were not many people around, so we moved on to Oxford, where we found a space in Broad Street.

Lots of people came by, took a leaflet or talked to us. So many said they were voting Green. Here we see groups talking to Larry Sanders and Elise Benjamin, two of the candidates on the Green Party list for South East England MEPs. After Broad Street, we headed for Cowley Road. You can see our Brexit barometer, where people stick stars on a scale from yes we need a people's vote to no. 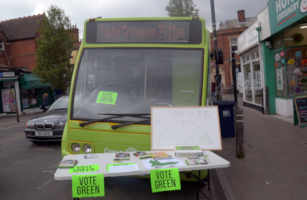 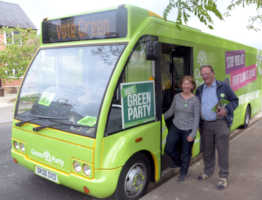 6 new Green Party councillors were elected on 2 May. So the tour headed to meet them and their voters, starting with Sam Casey-Rerhaye in Sandford, posing here with Larry Sanders outside Sandford Village Hall.

Leaving Sandford we headed to Abingdon, where a local boy took a star to put on our Brexit barometer. 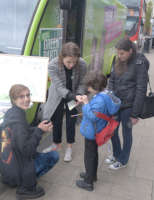 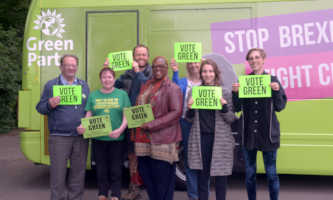 Then we met some Abingdon Green Party activists and Cheryl Briggs recorded a video on what it is like to be a new councillor. She was elected on 2 May to both Abingdon Town Council and the Vale of White Horse district council.

From Abingdon we went to Wallingford to meet Wallingford Greens. Even dogs like us there. 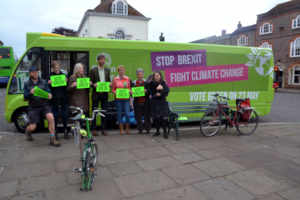 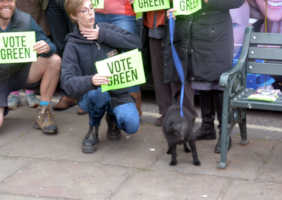 Finally, we reached the Wood Festival where we stayed for an hour. People were arriving for the weekend music festival. We parked opposite some solar panels, one of the many eco-friendly features that makes this festival different. 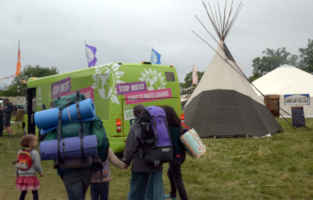 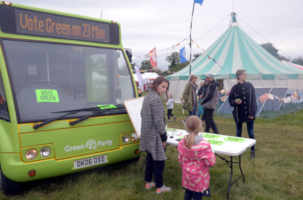 Robin Bennett, the newly elected South Oxfordshire Green councillor for Berinsfield and cabinet member for Economic Development and Regeneration was there. We met a Wales Green Party European election candidate, Ian Chandler, there. So I recorded a video.

Listen to why you should vote Green on 23 May.