The fracking threat in Oxfordshire

Posted by David Newman 347va on 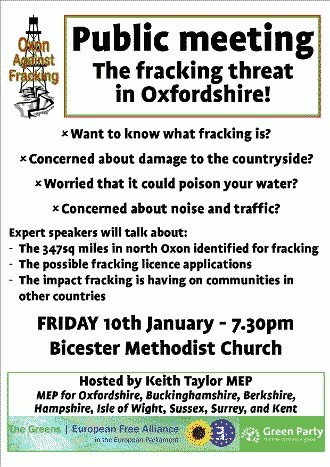 A 347sq mile expanse in north Oxfordshire has been identified as a possible source of shale gas by the British Geological Survey. Licence applications are anticipated early in 2014.

Keith Taylor MEP is co-hosting a public meeting with Oxon Against Fracking and local Greens.

The meeting will include a couple of short films about fracking, information about Keith’s personal experience of witnessing what it’s like to live near a fracking site and details of the areas in Oxfordshire where fracking could take place.  There will also be a question and answer session.