The Disappearing Voter in Oxfordshire

Councillor David Williams, leader of the Green Group on the County Council, will be presenting a motion to the County Council on the new system of voter registration which is coming into force shortly. Experience elsewhere suggests a loss of registered individuals by as much as 30% in the poorest areas.

This week election officers across the County are sending out voters registration forms to householders that state that existing voters will be transferred automatically onto the new register but that new voters will face a series of identification hurdles before they are accepted onto the register.

Cllr Williams says: "The new system which involves people visiting the Town Hall to 'prove' who they are with their passports is so complex and time consuming that many will not bother and the voters registered will rapidly decline. Just as we have been robbed of our state run and cheaper utilities such as gas, water and electricity, we are having our NHS gradually privatised. Now, the biggest step back into the nineteenth century will be that democracy will be undermined and we will return to a limited franchise similar to the situation after the 1867 Electoral Reform Act." 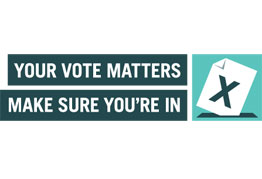 Don't forget to register to vote!