If you need large quantities, or large posters on garden stakes, please fill in the form below, or come to our Witney campaign office, Hexagon Business Centre, Avenue Four, Station Lane, Witney.

If you have a question for Larry Sanders, Green Party candidate for the Witney by-election on 20 October, please fill in the form below.

To donate or volunteer click the buttons on the right, or sign up for a Larry for Witney event.

Will you vote for Larry?

The green party has pledged to make britain fairer and less divided. We can do better.

How can we afford this?

The Bank of England has created hundreds of billions of pounds in the last eight years for the banks. We should invest at
least some of this in essential infrastructure and services to create real wealth. This way, we could have a world class quality of life for all citizens.

In Oxfordshire, the Green Party councillors produced an alternative budget that would have protected £7 million investment in the people of Oxfordshire, including rural bus services, all the childrens centres and adult social care, at a cost of 74 p/week increase in council tax. All the Conservative, Labour and Liberal Democrat county councillors voted against the Green budget and for the cuts.

The Greens are the alternative
Vote Larry Sanders on 20 October

All Oxfordshire community hospitals to go?

Oxfordshire Clinical Commissioning Group (OCCG) plans to close all nine of Oxfordshire's community hospitals. The plans were originally released in the papers for its meeting on 29th September.

Larry Sanders, Green Party Candidate for Witney, will be joining junior doctors at a demonstration on Thursday 29th September in Bonn Square, Oxford at 6.00pm. The event, organised by Oxfordshire Keep Our NHS Public, marks the continuing opposition of junior doctors and their supporters to new contracts, which are to be imposed from October. 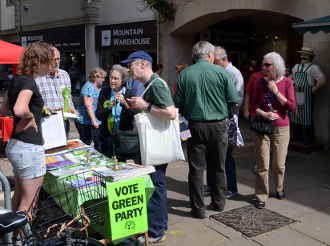 This Saturday curious Witney folk came to the Green Party stall to talk to Brigitte Hickman, our candidate for the Witney North by-election on Thursday.

From 10 'til 2, we asked people to sign Brigitte's petition to put solar lights on a path next to a river that lots of people use to get to a shopping centre, and to think of voting for her on Thursday.

The Greens have criticised Labour for engineering a 'sham election' timed at their convenience for when the majority of voters were absent.