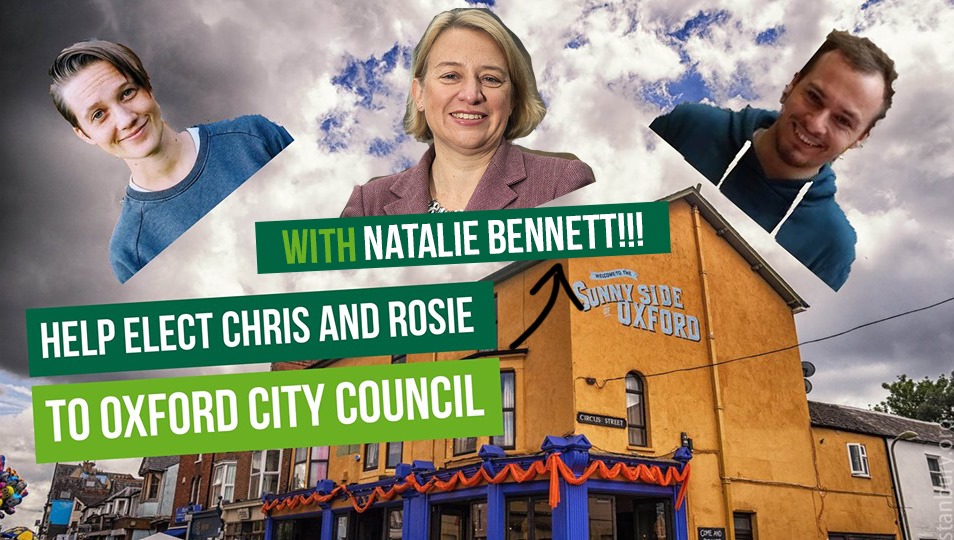 We're incredibly lucky to be joined by former Green Party leader and newly appointed member of the House of Lords Natalie Bennett. She'll be speaking about why it's so important to get Greens elected into local councils, as well as joining us on the campaign trail!

We're in a crisis. Constitutional chaos drawn out by the Brexit debacle. A decade of austerity tearing up public services and our social fabric. A climate emergency with just eleven years to mitigate.

The picture in Oxford is no less stark than across the country. The second highest rate of rough sleeper deaths in England. The most unaffordable city in the UK. A council failing to translate rhetoric on climate change into action.
We need a new politics, and we need radical change in Oxford.

Local government doesn't always have the best reputation. Nor does it often inspire and energise people. But it can be a momentous force for good when used in the right way. With the right policies, ideas and vision, local councils can totally transform people's lives.

We want to play a role in utilising the power of local government to make that radical change. That's why we're standing for election to Oxford City Council.

The elections aren't until May, but we need to hit the ground running now. As Greens, we don't have the money or resources of the other parties. What we have instead is a movement of people fighting for a better world.

That's why we're asking for your help.

We're asking you to give up a day of your time to help with our campaign. We'll have a range of campaign activities on the day. So whether you've never campaigned in an election before, are a canvassing expert or anything in between, your time will be incredibly valuable. Whether you're local to Oxford or not ,your time will make a huge difference.

Hope to see you there!