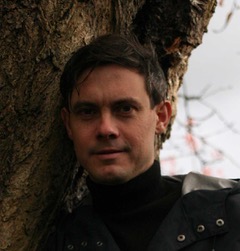 l live locally with my wife and children. In normal times I’m a professional musician and run an award-winning festival in South Oxfordshire called Wood. In the 2017 County elections I was runner-up in this division (Berinsfield and Garsington), and that year I was also General Election candidate for Henley constituency, winning most votes of any Green Party candidate in Oxfordshire in the snap election.

Since being elected to SODC in 2019, I have passed motions opposing the Oxford-Cambridge expressway, supporting community-led housing, and fought to include improved environmental measures in the Local Plan. In May I became joint Deputy Leader at the council, and have represented South Oxfordshire at meetings of Oxfordshire Growth Board and the Ox-Cam arc leaders group, pushing for better cycle routes and green housing standards. I’m currently working on measures to deliver sustainable, affordable and community-led housing in South Oxfordshire.

I know my local area contains many who are passionate about the countryside, run sustainable businesses, and hope to leave a habitable planet for their grandchildren. I’m prepared to stand and add to my existing workload because I feel there is a chance for a Green breakthrough at county level, perhaps even becoming part of a future adminstration and ultimately it’s vital for county and district levels to work closely together to ensure benefits, whether that be making plans greener or improving green transport measures. The proposed regeneration of community facilities in Berinsfield depends on this collaboration, with many facilities co-owned by the county and district councils, including the local childrens’ centre, which has lost its county council funding. Local government reorganisation is also on the horizon and many will agree with the Green proposal for smaller unitaries rather than the giant One Oxfordshire proposal, which will likely be more distant from residents.

My Green councillor colleagues represent parts of the division and I also have the support of local Lib Dems and independents (including the councillor for Garsington).

We’ll use the early campaign to promote our achievements at district level. There is also scope for endorsement from the Lib Dems and independents, and there is substantial support from green belt campaigners over the local plan, which will be coming back as a major issue as the election approaches.

Our district green group also issues regular press releases to media and social media, which will continue throughout the period. The big county-specific push would be in the run in to the election in 2021 and if Covid allows, canavassing likely Green voters and a day-of-election get out the vote effort.

As mentioned above, I’m already a councillor and in regular contact with Green Party mentors including from the Assoc of Green Councillors. I also meeting regularly with our existing county councillor, Pete Sudbury. At SODC I have worked cross-party to build and maintain a ruling coalition of Lib Dems – Greens with support from independents, and this may prove valuable in passing motions at county level too. I am also now experienced at working with officers in getting things done in local government, and also as an election campaigner and canvasser.