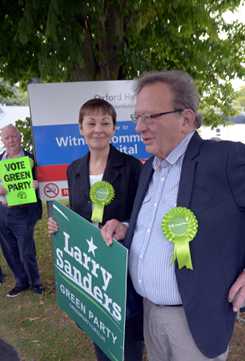 In front of Witney Community Hospital, Larry Sanders, Green Party candidate for the Witney by-election, announced his commitment to bring the NHS back into fully public hands, protect public services in Witney, and back local campaigns for a light railway to ease congestion on the A40.

He was introduced and endorsed by Caroline Lucas MP, co-leader of the Green Party.

Here is a video blog by Witney TV.