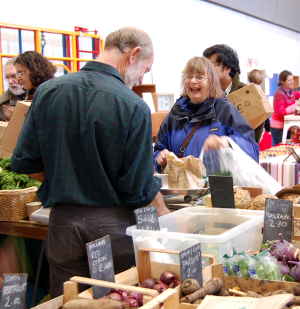 Mark Stevenson and happy customer at a farmers' market. 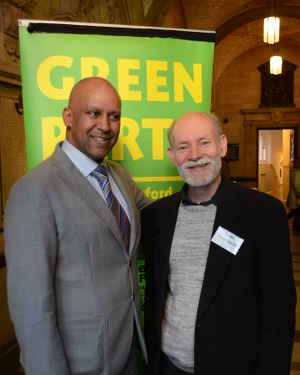 Mark Stevenson is your Green Party candidate for Henley in the general election on 7 May 2015.

Listen to his interview on local radio.

It is often said that too many MPs are increasingly drawn from a narrow background of professional politics. As a wage earner I have been a builder's labourer, head of a secondary school maths department, taught philosophy and ethics and am currently a self-employed market gardener. I have known what it is to live on a minimum wage, depending on tax credits to survive, and to earn well above median income. I am a parent and a step-parent. I helped to start a local Community Action Group and several community led Farmers' Markets; I am a parish councillor, part of our Neighbourhood Planning team and have been a school governor. However, I am also white, male, in my fifties and have a degree from Oxford, so to tell me apart from other MPs you would have to listen to what I say and watch what I do.

Why is Mark standing?

I am standing for the Greens because I share their vision of a fair society, in which progress and development is encouraged for the benefit all. This includes our children and future generations. Under the present Government the younger generation is struggling to achieve the quality of life that we were offered. Not least because we are increasingly despoiling and destroying the biosphere of which we are a part. The level of harmful development is no longer just a threat for the future but is impacting on the health and well-being of many now. Green Party policy is not about knee-jerk reactions, but plotting a path from the present, through the medium and long term to a society that functions for the common good. And I can't imagine anything better than being a part of that process.

What will Mark do when elected?

When we elect politicians, we are not giving them power, but responsibility. It is less about exercising power responsibly and more about exercising responsibility powerfully. If elected, that is where I would start, my responsibility to help develop a political structure that will enable everyone to have a fulfilling life. That cannot be achieved at the expense of others, as the growing inequality in contemporary society shows, and it will always be a work in progress, rather like science. I don't know who will form the next Government, or who will be elected to Parliament. So I cannot say what my role would be if elected, but if I can help promote progressive ways of living that work to the benefit of our environment , I will; if I can help promote a more equal society, I will; if I can help promote a more sustainable and secure economy, I will. And I will resist every move that threatens to damage those things.

What do you think of Mark as your future MP? Let everyone know by endorsing him below.

I think Mark Stevenson will make an excellent MP for Henley, better than the last two.