Oxfordshire Green Party has welcomed Oxford Progressive Alliance’s decision this week to no longer campaign for a Labour vote in Oxford East. 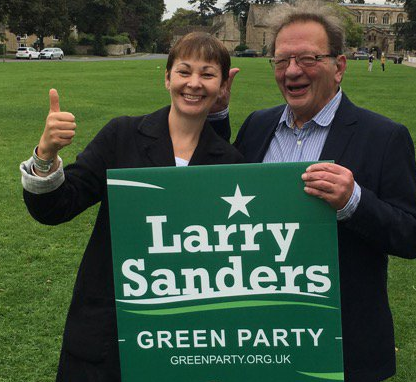 The decision was taken after Compass, the parent organisation of the Oxford Progressive Alliance, stated that voters should consider themselves free to vote for any progressive party in the seat.

Larry Sanders, the Green parliamentary candidate for Oxford East and brother of last year’s candidate for the Democratic Party nomination for US President, Bernie Sanders, said, “The Conservatives will not win in Oxford East. Voters should vote for the progressive party that they think best represents them. The Greens are committed to helping stop a Conservative landslide by standing aside in marginal seats where a progressive alternative may win, such as Oxford West and Abingdon, but this is clearly not the case in Oxford East.”

David Thomas, leader of the Green Group on Oxford City Council, said, “This is the right decision from the Progressive Alliance. Voters should follow their instincts on who can represent them best in this seat. When it comes to the issues that matter here in Oxford East – such as protecting the NHS, providing genuinely affordable housing, and stopping the worst impacts of Brexit on employment in the City - Larry Sanders will fight hard for them in Westminster.

The Oxford Progressive Alliance Facebook page states: "We are confident that Labour will hold Oxford East, and we wish them well, but all is to fight for in Oxford West and Abingdon! And we will fight together!  What we have in common is that we believe in a Better Britain: open, tolerant, progressive and with opportunities for all."

In an email to their supporters, Oxford Progressive Alliance state: "Compass see this [Oxford East] as a safe Labour seat where they are advising voters (via the tactical voting tool on their website) to vote for any progressive party." Compass have been working with the Greens to build a Progressive Alliance.

Local Green Parties in England and Wales have decided to stand aside their candidates in 22 constituencies in this General Election where they believe other progressive candidates have a better chance of winning.  Greens have withdrawn their candidate, Cheryl Briggs, in Oxford West & Abingdon and are supporting the Liberal Democrat candidate as the best placed person to take the seat from the Tories.

Larry will be speaking at the Oxford Progressive Alliance march and rally in Oxford on Saturday 20th May – 2pm, Broad Street.

In advance of the manifesto launch, the Green Party has published the Green Guarantees: a set of commitments that Green MPs will deliver to create a confident and caring Britain  www.greenparty.org.uk/the-green-guarantee

For more information about Larry: www.greenoxfordshire.com/larry_sanders

The National Health Action Party have endorsed Larry, a veteran health campaigner and former Chair of Oxon Keep of NHS Public, for the Oxford East Constituency.