Greens propose motion to City Council in support of refugees

Oxford's Green Councillors will be using the opportunity presented by a Full Council meeting to secure the City Council's commitment to supporting refugees.

The Green councillors have submitted a motion highlighting Oxford's duties as a City of Sanctuary (detailed below), and have invited Labour Leader, Bob Price, to second it. 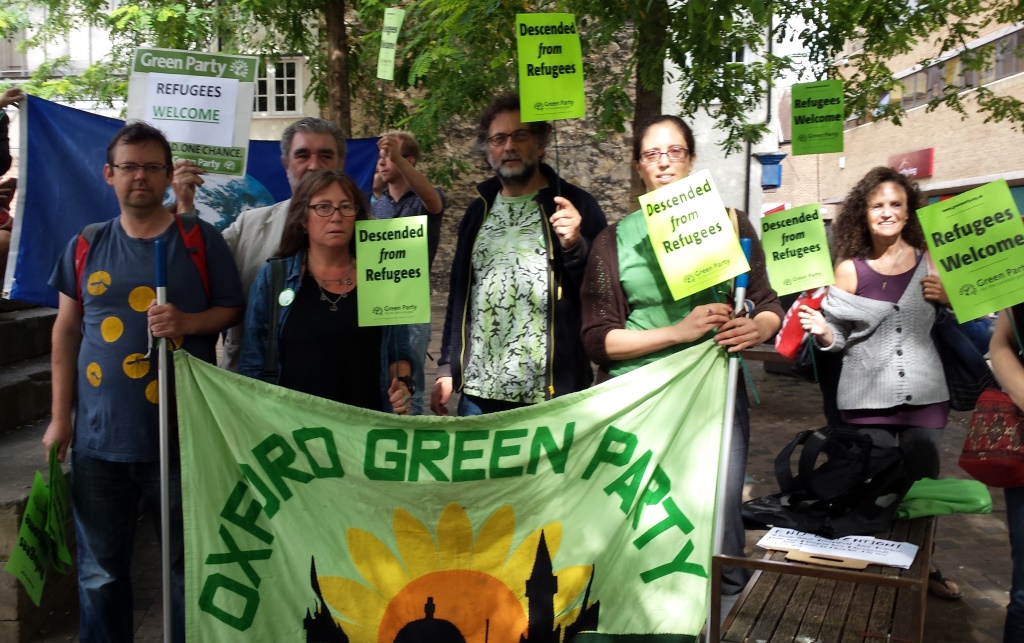 We would like Councillors of all parties to unanimously support this wide-ranging motion which commits the City Council to supporting local groups as well as reviewing its own budgets, services and policies to ensure that they are maximising the support given to refugees. We recognise that the Council is under financial pressures but it is in a unique position to offer assistance and show leadership.

Last month, Craig Simmons was in Bodrum, Turkey and saw for himself the unfolding humanitarian tragedy. At the Refugees Welcome in Oxford event held today in Bonn Square, Craig reminded the people there that Oxford has declared its wish to be a City of Sanctuary back in 2008, and both him and Cllr David Thomas promised the crowd that the Green Party will make sure that the Labour dominant council follows through on all its promises.

The public is invited - as always - to attend the council meeting, on September 23rd and witness the proceedings. We also encourage people to put their names down to speak: any resident can speak for 5 minutes at the start of the meeting in support of the motion - email the full wording to [email protected] before 5pm on Friday 18 September.

Oxford as a City of Sanctuary

On 6th October 2008, the Council passed a motion declaring itself to be a City of Sanctuary with the words  that “this Council wishes to promote the inclusion and welfare of those coming to Oxford to seek refuge and sanctuary.”

We recognise the strong support local communities, voluntary bodies, faith groups and others in Oxford already give to those seeking refuge and sanctuary. The strength of public feeling was well  expressed in the ‘Oxford Welcomes Refugees’ March on 6th September that attracted more than 2,000 people.

The UN refugee agency has asked EU Member States to immediately take 200,000 additional refugees to lessen the humanitarian crisis. In response, the EU has adopted a quota system which the UK Government has refused to participate in. Rather than the 25,000 that would represent it’s ‘fair share’ of migrants (spreading this across the country would mean about 60 refugees being accommodated in a City the size of Oxford), the Prime Minister has instead announced that his Government would make provision for only 4,000 each year.

Recognising its role and responsibility as a City of Sanctuary, this Council agrees to: