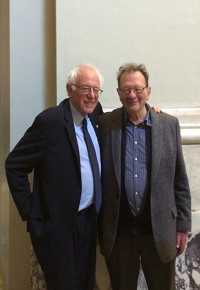 Larry Sanders, brother of Bernie Sanders, is standing for election as the Green Party MP for Oxford East. Like Bernie, he is fighting for the 99% in the UK against a government that favours the richest 1%, and for local people against the banks and big business. At his selection he said:

The major political parties are in disarray. The policies of the last 30 years, shifting resources and power from the majority to the richest, culminated in the illegality and greed which crashed the economy in 2008. The Green Party has pledged to make Britain a fairer and less divided nation.

Anyone in the world can contribute to Larry's campaign here. Political donations of more than £50 to a candidate are restricted to UK-registered electors and companies. UK voters can donate on this page. Or you can donate up to £500 to the Oxfordshire Green Party election fund.