Oxford City Council will be installing signs declaring Oxford to be a “Cycling city” on all entrances to Oxford as a statement of intent.  With regard to this, Green Party Cllr and Transport spokesperson Dick Wolff says

"This signage initiative is welcome as is the commitment to fund improved cycle provision. But it is worth putting this expenditure in perspective. The County and City Councils spend around £60m on transport and roads each year. Only a very small fraction is spent on cycle provision. And this is all set against a background of falling cycle use and increased accident rates. Much more needs to be done."

Note 1: The chart below shows the latest data issued by the County Council showing declining cycle traffic over the last 5 years and increasing casualty rates. 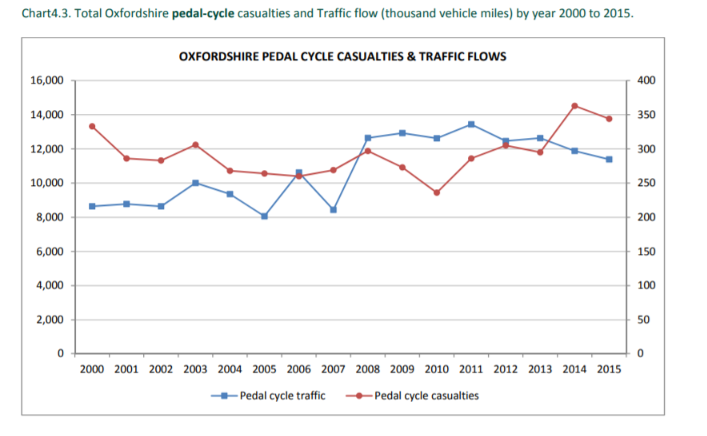 New signs proclaiming Oxford as a cycling city are set to be installed on all 11 roads entering the city centre.  The aim is to remind motorists to be more aware and respectful towards cyclists, and set a statement of intent for the city.  The 11 signs will be installed in:

Oxford City Council’s long-term vision – set out in the recently-published draft Vision 2050 – is to create safe and accessible cycling routes across the city to help tackle congestion and reduce air pollution.

In 2011, 17 per cent of commuters cycled to work in Oxford. The aim, through incremental changes over time, is to replicate the success of Oxford’s twinned city Leiden, where 70 per cent of people commute by bicycle.

The 11 new signs branding Oxford “a cycling city” will go up as additions to the existing “welcome to the city of Oxford” markers, which also explain Oxford’s twinned cities and that Oxford is a previous winner of Britain in Bloom.

It is believed to be the first time a UK city has installed such signs.

The first sign, in Marsh Lane, will be unveiled in by the Lord Mayor of Oxford, Councillor Jean Fooks, on Monday 17 July at 4.30pm.

The scheme was suggested by Jake Backus from Cyclox at the Oxford Cycling Forum, which Oxford City Council chairs. It follows Cyclox’s ‘Rights and Responsibilities’ campaign, which sets out how cyclists and drivers should behave within Oxford.

Between 2012 and 2016, the City Council invested £367,000 on improving cycling infrastructure within the city, including new signage to direct cyclists toward cycle-friendly routes, cycle training, and the removal of barriers on the cycling network.

In 2015, the City Council also installed 110 bike parking spaces at Seacourt and Redbridge park and rides to encourage motorists to cycle part of their commute into work.

Future investment in cycle routes in the city and beyond is a key to the future plans for Oxford.

Last month the City Council released a draft vision statement, setting out how Oxford will look and feel in terms of the economy, society and the environment in 2050.

The draft Vision 2050, which residents will be able to have their say on later this year, states that Oxford will have safe and accessible cycling routes for commuters, and substantial parts of the city centre will be traffic free for large parts of the day.

The City Council is also working with the County Council and Oxfordshire’s other district councils to ensure that investment in cycle routes, including super highways, is reflected in the Oxfordshire Infrastructure Strategy (Oxis), which is being developed by Oxfordshire Growth Board and will guide infrastructure investment for the county.

Councillor Louise Upton said: “As well as reminding drivers to be more aware of cyclists within Oxford city centre, these new signs will be a statement of intent from Oxford City Council.

“Our long-term aim is to replicate Leiden and significantly increase the number of people commuting to work by bike. This obviously won’t happen overnight, but this is one step towards that goal.

“Getting more people cycling is key to how we see the city developing. It is one of the best ways we can reduce congestion and pollution – and it will also help people stay fit and healthy.”

Oxfordshire County Council, as the transport authority, has consistently invested in cycling over a number of years.

Councillor Ian Hudspeth said: “I am pleased to support this launch.

“Oxfordshire County Council’s vision is for cycling to be accessible to everyone, regardless of age, background or cycling experience and we are investing millions of pounds in this now and will keep doing so in the future.

“Our Local Transport Plan is an ambitious 20 year strategy, which in Oxford includes a massive change in cycle route improvements to provide safe and direct access to a range of destinations.

“Since launching our plan in September 2015 the county council has invested in a number of studies to develop more proposals for cycle improvements on Oxford’s main transport corridors.

“Following a study for Botley Road we recently submitted a bid to government to fund a £6.9m package of cycle, pedestrian and public transport improvements along the corridor.

“Over the last few years the county council has also delivered a number of schemes that support more cycling including at Frideswide Square and The Plain roundabout.

“We are currently implementing a £12.5m package of improvements as part of the ‘Access to Headington’ project that will deliver new and improved cycle routes and priority as well as a number of innovative cycle features such as segregated ‘hybrid’ cycle lanes and cycle pre-signals.

Layla Moran, MP for Oxford West and Abingdon, said: “I’m delighted to support this initiative. Oxford is one of the UK’s great cycling cities, and together we can do so much more.

“We must invest in our roads and local infrastructure but it is important that we also look at different ways to support people hoping to use an alternative to travelling by car. Schemes such as this will help promote a cycle-friendly environment and as we reduce emissions, it will benefit us all too.”

Anneliese Dodds, MP for Oxford East, said: “I'm delighted that Oxford will officially be proclaimed ‘a cycling city' at the grand opening on Monday. Cycling is a great way to get around our city: it's great for people's health, helps reduce air pollution and congestion, and can be much quicker than going by car as well! I hope that this initiative will encourage more and more people to try getting on their bike.”

William James, Pro-Vice-Chancellor for Planning & Resources at the University of Oxford, said: “With 31% of the University’s staff cycling to work and 42% of its students using their bike to travel to lectures, it is essential that Oxford becomes a safe and pleasant place to cycle. These gateway signs are a small step in the right direction towards a city that truly welcomes cyclists.

Jake Backus, Cyclox Committee member, said: “It would be great if other cities follow Oxford’s lead to also declare themselves cycling cities.  It is low cost and supports an ambition to have healthier more sustainable cities which are people versus vehicle focussed and will encourage some people to give walking and cycling a go for all or part of their journey.”