3 mature oak trees in Bicester Road Kidlington are under threat after one of them was implicated in damage to a nearby house as a result of roots drawing large amounts of water in the very dry summer of 2018.  All 3 trees are on private land, although it’s not know who owns them.  They were however the subject of Tree Protection Orders (TPO) preventing them from being removed.

Green Councillor Ian Middleton has criticised the consultation process that has led to one of the trees having protection lifted in preparation for removal.  This was subject to a planning application but none of the local councillors, including Mr Middleton, were directly notified by the council as is the usual practice.  The two local parish councils in Kidlington and Gosford and Water Eaton were supposedly informed although neither council appears to have received the notice.  The council has since admitted that, due to an error on the local planning lists, some applications are not being notified to councillors.

The first tree is now due for removal after the end of May.  The two other trees are currently still protected, but Cllr Middleton is concerned they may also come under threat if they are not properly managed.  After speaking to council officers at all levels no one appears to be prepared to take responsibility for the trees.  Cllr Middleton is also concerned opportunities to consider alternatives to complete removal of one tree were missed due to the council’s poor consultation.

“It’s very sad that a tree of this age and condition is going to be lost to the local environment.  Whilst I accept there are good reasons for it’s removal, I would still have liked the opportunity to have engaged properly with the consultation process and perhaps called in other experts who could have offered alternatives to complete removal.  We’ll never know now.

“My concern now is to ensure the remaining 2 trees on that same site are properly maintained to prevent the same fate befalling them. This could be by either by finding the owners of the trees or by the District or County Council taking ownership or management of them.

“It’s highly likely that this tree has suffered as a result of the increasingly dry summers we are having now due to climate change, causing it to encroach on the adjacent property. As climate change progresses, councils across the country will have to face up to these sorts of problems with trees in urban environments if we’re not to lose more of them.  This means real alternatives to just cutting them down.

“CDC has adopted motions on climate change emergency and a tree cover, both of which should mean we take far more care of the trees we have now, as well as planting new ones.  After the sad loss of an impressive mature oak tree like this, probably hundreds of years old, I hope the council will take a more enlightened approach to protecting the remaining trees on this site.”

"The Parish Council can find no record of being consulted on the lifting of the TPO on this tree.  We are extremely concerned about the loss of such an important part of our local green heritage and would certainly have commented on the application to remove it, had we had the opportunity.  Whilst it seems that the battle to save one tree is lost, it’s extremely important that the remaining trees on that site are properly maintained and protected for the future, and we call on the District and/or County Councils to fully engage with us to discuss options to achieve that.” 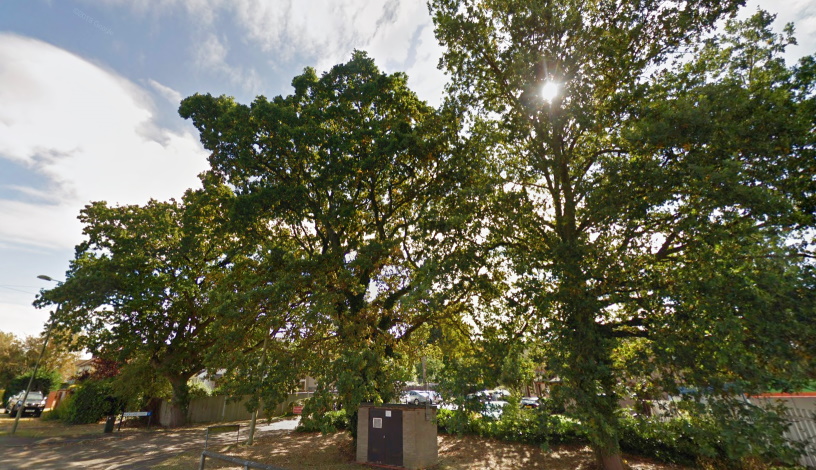 Photos attached with Mr Middleton and Mr Stayt showing the tree in question and the other trees potentially under threat.