2022 produced a truly exciting set of local elections for the Green Party in Oxfordshire! Of the 40 Green Party members who stood as candidates in the three councils that had elections, six were elected as councillors: 4 in Oxford City, and one each in Cherwell and West Oxfordshire. Our new councillors are: 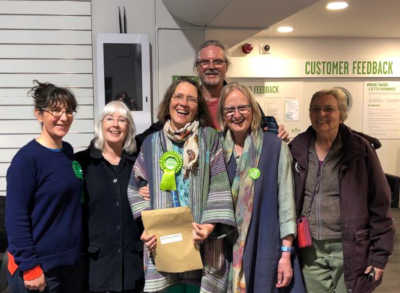 In West Oxfordshire, victory in the rural ward of Brize Norton & Shilton was achieved despite the decision to target it being made made only a few weeks before the election. In a straight head-to-head with a long-serving Conservative incumbent who received 70% of the vote in 2018, Rosie Pearson won 54% of the vote, joining existing Witney North councillor Andrew Prosser as the second Green on the council. A run of losses to other parties meant that the Conservatives have lost control of West Oxfordshire District Council for the first time since 2000.A new governing coalition of LibDem, Labour, and Green councillors has taken over West Oxfordshire, similar to that on the county council. 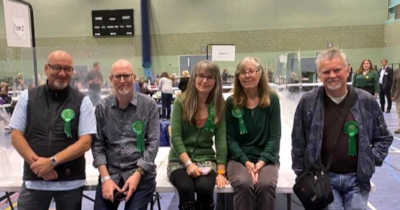 In Cherwell, Fiona Mawson won comfortably with a 252 vote majority in Kidlington East, joining her partner Ian Middleton as the second Green representative in the ward. Damien Maguire was unable to take Bicester East from the Conservatives, but the Tories still suffered heavy losses with their majority on Cherwell District Council being cut from 16 to just 2. Next year the hope is that further victories will bring to an end over two decades of Conservative rule in the district.

Once again, the Green Party came second over the whole city, with 18.3% of total votes cast. Oxford saw the biggest increase in Green councillors in nearly 20 years, eating into Labour’s large overall majority. 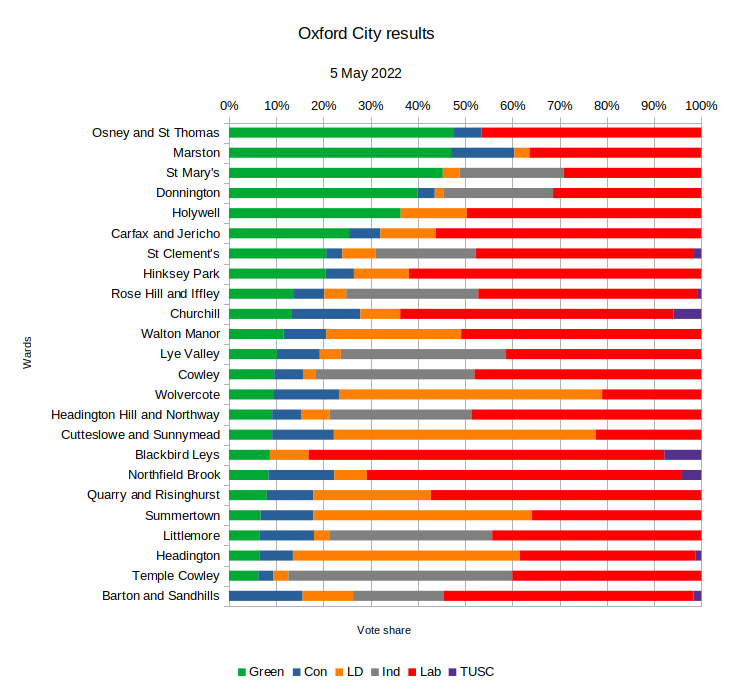 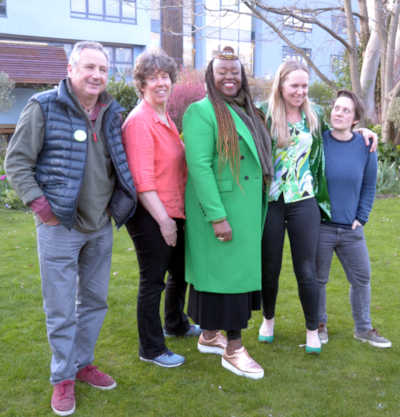 We campaigned heavily in 5 wards and won 4 of them. Emily Kerr comfortably retained the seat in St Mary’s ward, taking over from retiring councillor Dick Wolff. After falling 60 votes short last year, Rosie Rawle won Donnington ward by 169 votes, joining existing Green councillor Lucy Pegg and giving the area two Green councillors again for the first time since 2014. Al Morris became the first ever Green councillor for Marston, turning his 90 vote loss in 2021 into a 246 vote majority this time. And in the closest race on the night, Lois Muddiman also broke new ground for the party for the first time, winning Osney & St Thomas from Labour by just 22 votes. The win was due in no small part by the support of the LibDems who chose not to stand and to openly back Lois - one of the many benefits from the cooperation that has existed since the decision was taken by Green members to back Layla Moran in the Oxford West & Abingdon constituency. The only disappointment of the night was Dianne Regisford's loss in Holywell ward. The ward is notoriously difficult to campaign in as it consists almost entirely of students in college accommodation who change each year, and despite a vigorous campaign she was unable to displace the sitting Labour councillor. 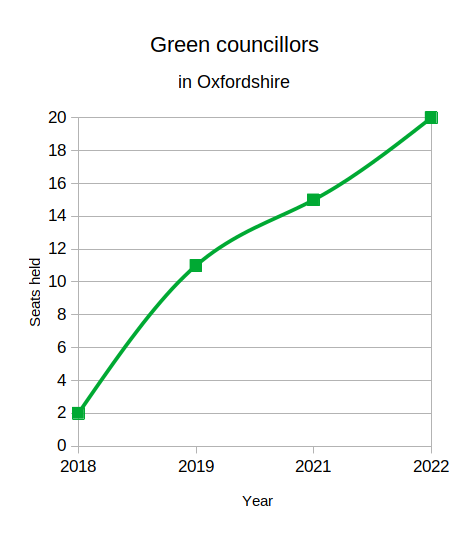 Overall, the political change in the county since 2019 has been quite remarkable. Just over three years ago there were only two district or county level Green Party councillors in the whole of Oxfordshire, both in the same ward on Oxford City Council. At the same time, four out of the five district councils in the county were controlled with large majorities by the Conservatives, and the county council was also Conservative-run, backed up by a handful of Independents.

Three years on and the situation is markedly different: we now have 18 Green Party councillors serving the people in 20 district wards and county divisions across Oxfordshire (two councillors having been elected at both district and county level), with every council now having at least one Green. The Conservatives now control just one local authority in Oxfordshire (Cherwell) while Greens are part of ruling coalitions on South Oxfordshire District Council, Oxfordshire County Council, and now in West Oxfordshire.