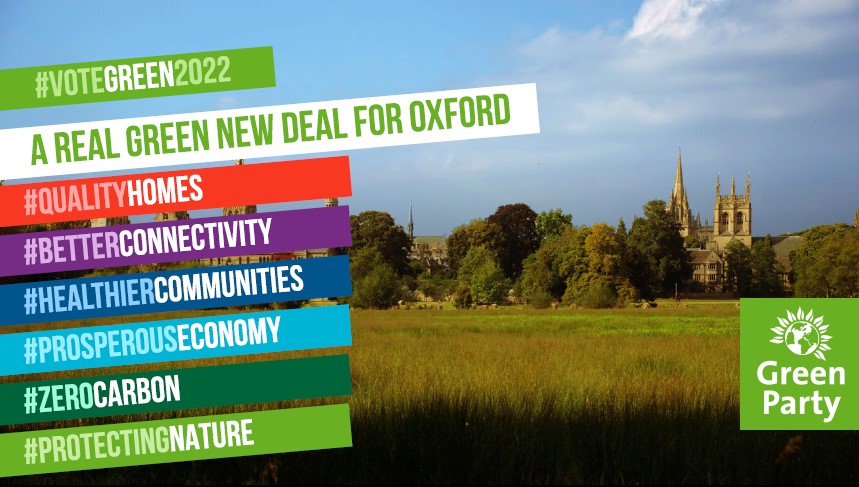 In our 2022 Oxford City Council manifesto, the Greens are calling for:

Quality Homes
Oxford has the least affordable housing in the UK. We believe that access to affordable, secure and decent housing is a human right, not a privilege. Nobody should be left homeless or have insecure accommodation.
Better Connectivity
While transport is primarily the responsibility of the County, the City Council must play a key role in delivering sustainable solutions including removing the need to travel. In the past, there have been many empty promises.
Healthier Communities
When it comes to health, Oxfordshire is a two-tier County. Most enjoy above average well-being yet six wards in Oxford fall within the 20% most deprived in England. In these areas, deaths from preventable causes, self-harm and obesity are above average.
Prosperous Economy
COVID and the cost of living crisis has turned the world upside down, exposing major weaknesses in our economy and the deep-seated inequalities in our City that meant the most vulnerable people were hit the hardest.
As the local economy recovers, we have a once-in-a-lifetime chance to build back better than before.
Zero Carbon
Under pressure from the Greens, the Council has recently committed to go ‘net zero’ by 2030 and is part of a Zero Carbon Partnership which has set itself the target of making the City ‘net zero’ target by 2040. Though worthy, these commitments exclude many sources of carbon emissions and are unfunded.
Protecting Nature
All species on Planet Earth are the life support for all others. Greens have long warned of the threat posed by the loss of species – a threat parallel with climate change. Both are linked in the Climate and Ecological Emergency Bill, which Green MP Caroline Lucas introduced in Parliament.