Tonight we are launching our manifesto for the 2021 Oxford City Council election. 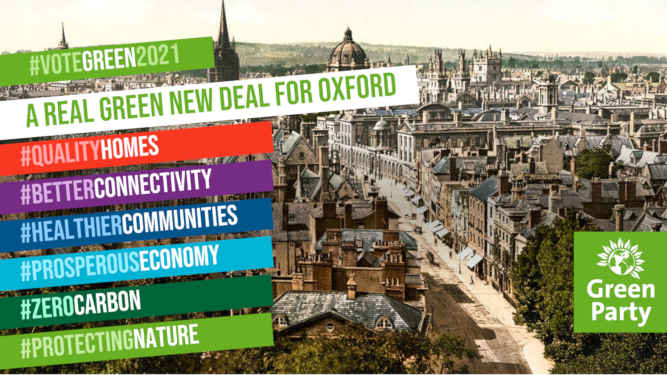 #QualityHomes
Oxford has the least affordable housing in the UK. We believe that access to affordable, secure and decent housing is a human right, not a privilege. Nobody should be left homeless or have insecure accommodation.
#BetterConnectivity
While transport is primarily the responsibility of the County, the City Council must play a key role in delivering sustainable solutions including removing the need to travel. In the past, there have been many empty promises.
#HealthierCommunities
When it comes to health, Oxfordshire is a two-tier County. Most enjoy above average well-being yet six wards in Oxford fall within the 20% most deprived in England. In these areas, deaths from preventable causes, self-harm and obesity are above average.
#ProsperousEconomy
The coronavirus pandemic has turned the world upside down, exposing major weaknesses in our economy and the deep-seated inequalities in our City that meant the most vulnerable people were hit the hardest.
As the local economy recovers, we have a once-in-a-lifetime chance to build back better than before.
#ZeroCarbon
Under pressure from the Greens, the Council has recently committed to go ‘net zero’ by 2030 and is part of a Zero Carbon Partnership which has set itself the target of making the City ‘net zero’ target by 2040. Though worthy, these commitments exclude many sources of carbon emissions and are unfunded.
#ProtectingNature
All species on Planet Earth are the life support for all others. Greens have long warned of the threat posed by the loss of species – a threat parallel with climate change. Both are linked in the Climate and Ecological Emergency Bill, which Green MP Caroline Lucas introduced in Parliament.
#Coronavirus
We applaud the work of the NHS and frontline workers for their dedication and commitment during the pandemic. But the Government has a lot to answer for.
#AGlobalCity
Green MP Caroline Lucas has proposed a number of Parliamentary motions calling on the Government to end the promotion and export of military equipment to authoritarian regimes.
#LocalDemocracy
Democracy is not a spectator sport, it's a participatory event. If we don't participate in it, it ceases to be a democracy.
#Climate Emergency
No more broken promises. The City Council has said a lot about climate change but achieved very little real change.
#15MinuteCity
Access, not mobility, should guide urban planning decisions. The policy landscape is changing as decision makers and advocates become more aware of this. The 15-Minute City Project
#AUniversityCity
Humans are constantly learning and the world is an experiment. Our task is to light the way. Ernst Bloch
#RacialJustice
A lot of the time when people talk about colonialism they think of it as a past event that happened. They don’t think about it as something that manifests itself in everyday life at institutions like Oxford. Oxford law student Ntokozo Qwabe